As a leading innovation & entrepreneurship evangelist in India, Dr. Chinchure has delivered talks and conducted sessions at various platforms attended by close to 25000 students and business professionals of various organizations around India to create awareness on innovation, intellectual property and entrepreneurship. 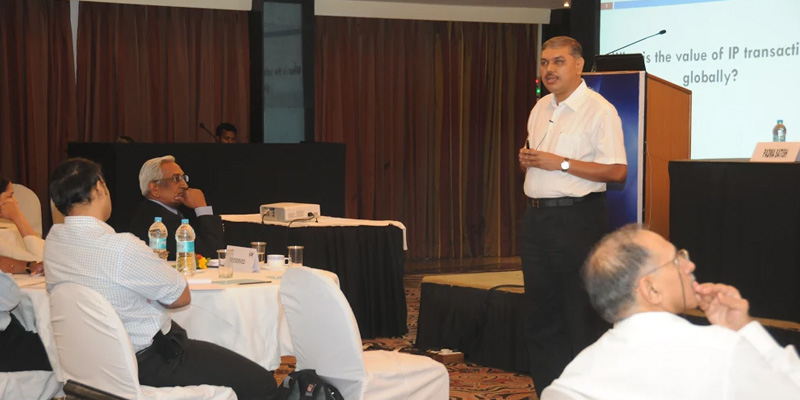 Moderated a keynote panel on "Putting resources to work to leverage impact" at the 10th Development Dialogue organized by the Deshpande Foundation. The resources are a key component of getting any idea to scale. With infusion of new capital into the social enterprise sector, it opens up many opportunities for impact investors and CSR to strengthen the sector. However with opportunities, also comes the responsibility of utilizing resources in ways that create sustainable impact and enables operating models to run cost-efficiently. Through relevant examples, panelists engaged in philanthropy shared their deep insights and models oneffectively leveraging resources to create impact.

Facilitated a discussion with Dr. Rober Stoner (Deputy Director for Science and Technology, MIT Energy Initiative) and Mr. JayeshRanjan (Secretary, IT, Electronics & Communications Department, Govt. of Telangana) at the 7thYuva Summit organized by Deshpande Foundation. The Summit is a national conference on youth leadership, development and entrepreneurship put on by LEAD. Students, faculty, and entrepreneurs come together to learn and share their innovative leadership initiatives through project exhibitions.

Moderated a Panel on Livelihoods: Belling the Cat in the breakout session. We discussed the need to scale good livelihood ideas and models at a rapid scale to be able to respond to the livelihoods needs of millions of people. The panel delved into nuances and challenges of a present model and brought out tenants of a scaling models.

Moderated an inaugural panel on “Pro-Startup Era: Making India an Entrepreneurial Country” of Startup Dialogue participated by Dr. DeshDeshpande (Founder of Deshpande Foundation), Mr. Ashank Desai (Founder of Mastek) and Dr. P. Seshu (Director of IIT, Dharwad). We had an engaging discussion on various topics, including,

Jury to Sandbox Samvidha Finale Pitch: Samvidha is a unique platform that allows social entrepreneurs to pitch their impactful ideas that deserve support. The Deshpande Foundation aids those entrepreneurs who wish to have their ideas incubated in the Sandbox.

Delivered a talk as a Jury to the Finale of Teenovators competition. Teenovators is an innovation challenge for teenagers conducted by Manipal University in association with INK Talks. It is a pan-India national level competition for 9th - 12th standard students. The experience of ideating, designing solutions, interacting with other innovators and industry experts in addition to presenting their projects will not only broaden the students' perspectives of the problems around them but also motivate them to think of solutions - and even become part of the solution.

Conducted two days workshop at the Birla Copper, Dahej on “Identifying Innovation Opportunities”. The workshop was focused on learning various tools for identifying innovation opportunity that creates value for the company.

Inaugurated 8th Edition of Annual HR Summit organized by Automotive Components Manufacturing Association (ACMA) at Pune. The theme for HR SUMMIT was “Business Excellence through People – Realizing the “Make in India “Dream”. Delivered inaugural talk on “Rethinking HR to realize the “Make in India” Dream”. Over 90 HR professionals attended the event from various companies based in Western India.

Conducted a session on “Succeeding in Innovation” for the existing and new innovators at the Digital Impact Square (DISQ), Nashik, India. Also, mentored three teams developing innovative solutions at DISQ. The Digital Impact Square (DISQ) is a platform founded TCS Foundation for students, young startups, and budding entrepreneurs from across India. It is an open social innovation platform designed to enhance the lives of citizens. The platform encourages innovation using digital technologies, to address the needs of citizens through their voice and that of the local administration, government, and industry.

Delivered a talk as a Jury to the Best Alumni and Best Entrepreneur of Symbiosis Institute of International Business (SIIB) at ANUSMRUTI 2017 event at the SIIB campus in Pune.